The Laurie Copping Award for Distinguished Service to Children’s Literature in the ACT is a biennial award of The Children’s Book Council of Australia ACT Branch. 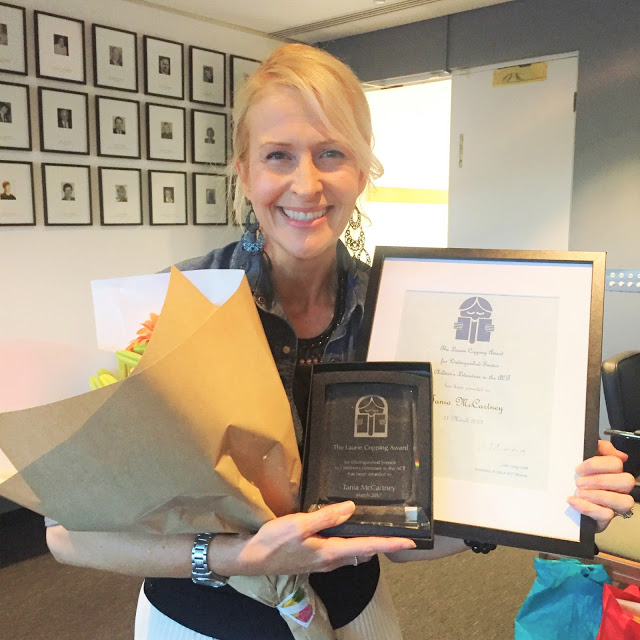 Tania McCartney is a very worthy recipient of the Laurie Copping Award. She is passionate, gracious and articulate about the importance of books for children.

Since 2008, when her four self-published books about Riley gained popularity, mainstream publishers began to recognise her talent. In 2009 Tania created Kids’ Book Review which includes reviews, interviews, profiles of organisations and literary places worldwide and advice to emerging creators. She was an ACT Ambassador for the National Year of Reading in 2012, gives local and national radio interviews about children’s literature and contributes to a range of print and online publications.

Tania brings literature to children in the ACT by visiting schools as an Ambassador of the Chief Minister’s Reading Challenge and is a regular speaker at the ACT Children’s Seminar in Book Week. The many projects that she initiates and takes part in are richer for her involvement, particularly her continuing commitment to giving her time to encourage other book creators. For her significant and sustained contribution to the ACT in the field of Children’s Literature we are honoured to present Tania with this award.

Rosemary Thomas is a very worthy recipient of the Laurie Copping Award. Since graduating from Teacher’s College in the 1970’s she has been a member of the Children’s Book Council of Australia, both in Victoria and the ACT.

She is passionate about the importance of reading to children and is a positive and visible role model who reads voraciously. She is diligent and reliable and participates in all aspects of the ACT Branch. Most recently Rosemary has been a Fiction Judge, an Awards Co-ordinator and an energetic member of the 2014 Conference Committee.

Rosemary promotes the CBCA wherever she can and has been responsible for attracting new members to our Branch. For her significant and sustained contribution to the ACT in the field of Children’s Literature we are honoured to present this award to you.

The award is named after Laurie Copping, member of the CBCA ACT Branch from 1962 to 2003. Laurie’s roles within the organisation included being the president of the ACT Branch numerous times as well as National president, ACT judge for the CBCA Awards (1973-74), National archivist (1988-2003), regular reviewer for the CBCA journal Reading Time and a member of its editorial board. He was also instrumental in the setting up of the Lu Rees Archives at the University of Canberra in 1980.

The Laurie Copping Award for Distinguished Service to Children’s Literature in the ACT is a biennial award of The Children’s Book Council of Australia ACT Branch, the accent being on Service. A recipient of the award, then, will have given service well beyond his or her professional association with children’s literature. Such service may have come in one or more ways:

The recipient will have made a contribution primarily in the ACT, but services nationally and internationally will be regarded with favour.

The Award is to take the form of a framed citation, a keepsake gift and honorary Life Membership of CBCA ACT.

The citation is to be read at the presentation of the Award, printed in the newsletter, included on the web site, included in the President’s weekly e-News and sent to Reading Time and the CBCA archives.

The Award is to be administered by a convener appointed by the ACT Branch Committee.

The recipient shall be a person who has made a significant contribution to children’s literature in the ACT.

Whilst there is no restriction on the types of contribution made, recipients’ contributions must encompass more than their profession or occupation.

No person may receive the Award more than once.

Candidates need not be members of the CBCA.

Nominations must be submitted on the supplied Nomination form PDF (148KB) with no more than one additional A4 page supporting the nominee.

Invitation for nominations shall be published on the website and in the weekly e-News sent out by the President.

Nominations shall be no more than one A4 page. The judging panel shall advise the CBCA ACT Branch Executive of their decision no later than three weeks prior to the awards presentation.

Late nominations will not be accepted.

Nominees shall be supportive of the objectives of The Children’s Book Council of Australia ACT Branch as set out on the Branch constitution.

They shall have made a significant contribution to children’s literature in any of its facets primarily in the ACT.

Should there be a number of nominees in any year that the judges consider equally deserving of the Award, the judges shall then give preference to those for whom no other award or honour is available in the field of children’s literature.

A nominee who has been unsuccessful may be re-nominated without restriction in subsequent years.

The judges may withhold the award if they consider no person of sufficient merit has been nominated.

Nominees must be living at the time of nomination. In the event of the recipient dying after nomination, the award may be made posthumously.

The judges have the right to hold over nominations from year to year should they consider a nominee particularly outstanding.

There shall be three judges: the Award Convenor, the ACT Branch President and a member of the ACT Branch committee to be chosen by the Branch Committee.

In the event that one of the judges is nominated for the Award, or is otherwise unable to participate in the judging process, the ACT Branch Executive shall appoint a replacement.

Copies of nominations will be sent to the judges for perusal and research three weeks prior to judging.

A call for nominations shall be made in the ACT Branch newsletter, on the website and in successive weekly e-News sent out by the President’.

The closing date for nominations shall be prior to the end of February and dependent on the date of the AGM.

The Convenor is responsible for the copying and distribution of nominations to the judges and for arranging and chairing the judges’ meeting.

The ACT Branch President is responsible for informing the recipient.

The Award should be announced and presented at the AGM or another suitable occasion selected by the ACT Branch Executive.

The list of nominations, and the judges’ deliberations, shall be confidential.

The nomination of the recipient shall be retained in the archives. All other nominations, notes, etc. shall be held over by the ACT President for reference until after the next Award period and then destroyed.